You are here: Home / Archives for Real Estate

Actually it is clear, if my sources are correct, and as my friend Rupert once told me: when the pickings are slim news-wise you have to dig deep to manufacture your own, or put a naked woman on the third page.  That is why I am happy to report that a 20-story rental building is slated to break ground on the western half of this lot by the summer.  It’s a good thing too, because if the first story is correct we are in for an invasion on a par with Haight Ashbury in the Summer of Love.  Of course in 2012 that necessitates lap pools, granite counter-tops, and kids’ playrooms in order to foment a movement.  Ohhh, I see, all you need to do is redefine the word ‘Hipster.’  Wow, what a sea change, according to the article even the Mayor’s on board for this Occupation.  Combined with Sweetleaf opening in Williamsburg we’ve really come full circle!

Sweetleaf Opens In Williamsburg – yawn, I already told you that two months ago

Is that a stadium they’re currently building on Center Boulevard?  No, but if it were then several of the inhabitants next door would feel right at home.  We here at LICtalk not only provide you with links to news, events,  and openings, but also LIC dogma and rumors.  In the latter category we have the above headline, but we’re not going to make it that easy for you and just reveal the names.  That’s because we are using the occasion to inaugurate our new twitter feed: @LICtalk

So go sign up to get our tweets, it’ll provide you with more up to the minute LIC flashes and ruminations and the best part is you won’t have to read all my babble!  And now that you know where they live, why don’t you drop in and say “Hi” to our new celebrities …err neighbors.  Or you can take a look at the roster below and act like a real NY’er: wait until you spot them on the street and then ignore them.

Next sports post: Interview with home-grown celeb Metta World Peace, or as he was known when he lived in LIC, Ron Artest …talk about rumors!

The Baccaulaureate School for Global Education in Long Island City, Queens, one of the best in the nation

…Oh Wait, LIC will not be getting any until next year

There’s a feeling I get when I look to the west,
And my spirit is crying for leaving

Back in 1973 those words may have rung true regarding inter-boro movements, but in 2012 I think east supplants “west” in terms of migration patterns and true desires in NYC.  As we know, nowhere sits more closely in the cross-sights of this exodus than LIC, as it effectively bisects Manhattan and the proximity and access to it are nonpareil.  Thus I begin this weeks news wrap with a story from the NYT titled “Enter The Contentment Factor” about a young couple searching all over Brooklyn and Queens for a suitable apartment and asking themselves the eternal NYC apartment hunt question:

‘What’s more important, being happy in the apartment or saving money?’

Only to come to the conclusion

The answer was obvious. Long Island City it would be, despite rents that were much higher than they had hoped to pay.

Need I say more?  Well if you give me an opening then I shall, where do you think the best public high school in NYC is located?  Well the title is a little disingenuous as it’s actually in Astoria, but by the time they finish all the new buildings in LIC there will probably be a quick shuttle to it and we can repatriate it for our own.  The next story is just what I’m talkin’ about: Manhattan, Brooklyn, and LIC are mentioned as getting the new bike rental kiosks, as if LIC we’re a county of it’s own, how special does that make you feel?  Oh, and they throw in a new bicycle path as icing.  It makes me wonder, it really makes me wonder what other good things could be coming our way, oh look it’s more cops!  To police all those Stop sign runners, bicycle thefts, and massage parlor infractions I’m sure. Next up I decided to include a story about what’s happening in Elmhurst.  I don’t know about you, but since moving to LIC I have taken a very keen interest in the rest of Queens and this article encapsulates well all the new developments going up there, how it obviously differs in many ways from LIC, and some excellent restaurant suggestions.  Four other stories of interest are included which makes a total of ten for this post: we have hit double digits and my head is humming! 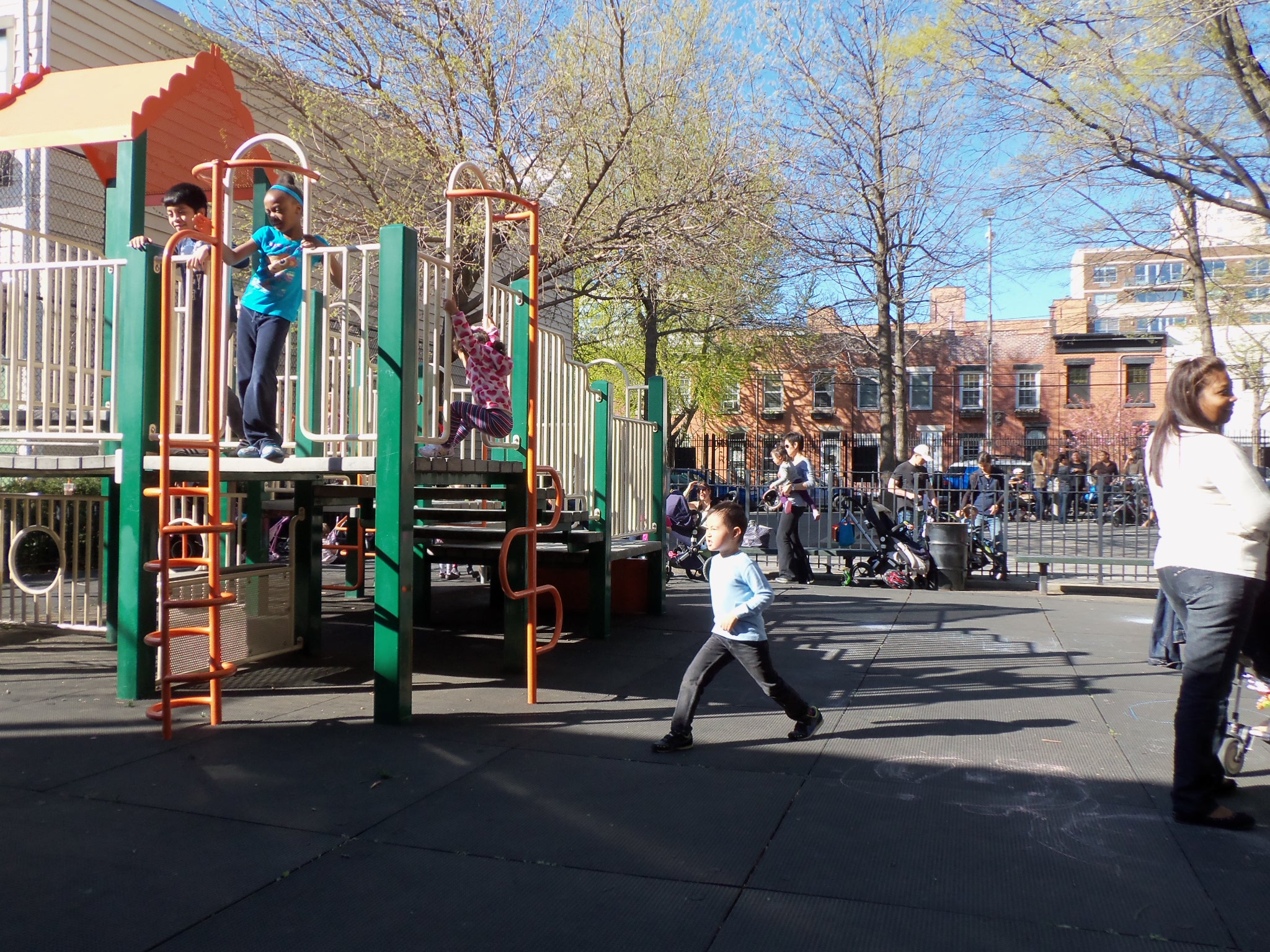 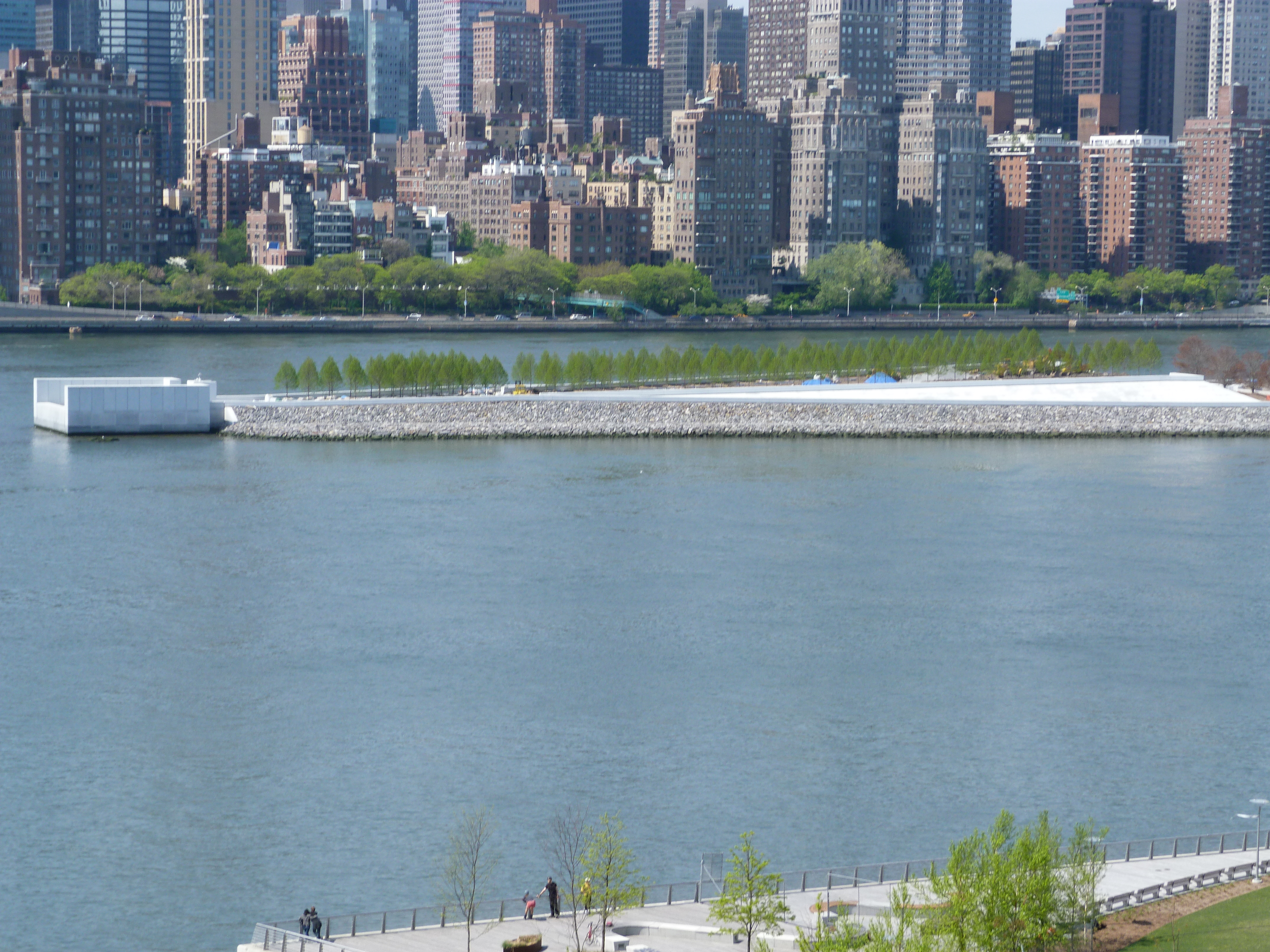 For about two years now, there has been an enormous dredging/buttressing project occurring on the southern tip of Roosevelt Island.  Commencing so soon after the 2008 financial meltdown and in what is really an impossible to reach, forlorn area(as is much of Roosevelt Island), residents of LIC overlooking the construction may have mistaken it for a 21st century version of a WPA(hint) project, as most of the visible work appeared to be dirt-moving on a massive scale.  In the last three months something has actually evinced itself above sea level, but “what” was completely indeterminable as can be seen from the picture above.  Our sleuthing has revealed that it is to be a memorial to Franklin Delano Roosevelt.  Unfortunately, now that I know what it is, every time I see it I can’t help but worry ‘I wonder if I’m gonna get my social security check when I retire in 30 years?’

Further down in the article we also learn about the new stores coming to Roosevelt Island, which in my mind sums up the difference between us and them: They Get Subway, We Get Corner Bistro!  Which leads to the next story about how small shops boost locals nabes, with a nice profile of a small shop on Center Boulevard familiar to many.  The segways keep coming with yet another “up and coming” article on LIC in the WSJ, revealing that a new Sweetleaf will be opening up on Center Boulevard.  I’m keeping my fingers crossed that Applebee’s “There’s No Place Like The Neighborhood” slogan doesn’t migrate from Times Square.  The article also states that LIC rents “are still 30% lower than similar product in Manhattan.” Where did they get that number from?  Probably the same place that they got the intel that there’s no place to go in the ‘hood, that’s such 2011 mindspeak.  Furthermore there is no “similar product” in Manhattan, unless you count 15 Central Park West, and then you’d be stuck with Sting and Lloyd Blankfein as neighbors.  Rounding out the news we have another new development coming to Northern Boulevard, CUNY Law School moving into Citicorp space, ‘Romeo and Juliet’ coming to Jackson Avenue, a heckler incident at Laughing Devil caught on tape, and finally another possible extension of the 7-train.

7 Train Extension To Chelsea?  I’ll Parlay That With My Social Security Check At A Million To One