You are here: Home / News / $5 MILLION APARTMENT FOR SALE IN LIC, BUT THAT’S NOT THE STORY 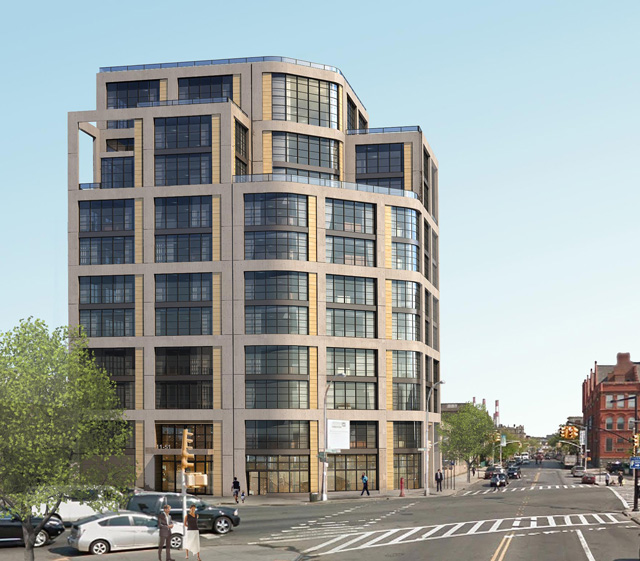 That’s right folks, less than one week after I broke the news about Queens most expensive condo, another seller comes along and crushes the previous record holder by 50%.  ONE WEEK!  The raw numbers equate to an asking price of over $2,500 a square foot.  I’ll leave it up to the readers to comment on the price and valuation of this particular apartment, but I think there was a much bigger story lurking behind the catchy headline above, which quietly dropped last week.

That story was an interview with Sam Charney, a new developer spun from the Two Trees team in Dumbo.  In it was revealed a sketch of a new building he has planned for Jackson Avenue, kitty corner to MoMA PS1, or as we locals are more likely to refer to it: across the street from the BP station.

While The View gets all the attention, it’s price points and status are mostly reliant on its waterfront location, and thus its views.  The exterior and interiors are nice, but there is nothing distinguishing about it’s architecture, and it’s sales points were always directed at the 1%, not the 1/10%.1

If Charney’s sketch becomes a reality, it will be the first time a developer has ever focused on constructing a building geared towards the very high end market.  Furthermore, architecturally it is noticeably distinct from anything in the neighborhood, and in my opinion visually stunning.  If you are interested in LIC real estate (who isn’t?), I highly recommend you read the whole interview, as Charney has a full grasp of where Long Island City is in 2014.  Here is a choice example:

“…if you asked today’s younger generation what their ideal apartment would look it, it would probably resemble a loft in Tribeca, Soho or the Meat Packing District; to that effect, the project will also have higher end appliances, fixtures and finishes than anything currently on the market in Long Island City …Our project is 25% one-bedrooms, 50% two-bedrooms, and 25% three-bedrooms. With 75% of our apartments being family-sized residences, we are definitely catering to the emerging ‘young family’ demographic in Long Island City. In the past, the neighborhood was viewed as a cheaper alternative to Manhattan for the young professionals who worked in midtown. Now, all of those young professionals have fallen in love with the neighborhood. …The energy and excitement is evocative of what we saw in Williamsburg over the past ten years and it’s electrifying to be playing a small part in it once again.”

Yeah, you nailed it Sam.  $5 million apartments notwithstanding, it’s all about tomorrow, not today.  That’s the story!

Interview With The Developer: Sam Charney – “I think in five years, Vernon Boulevard and Jackson Avenue will have culinary scenes that rival those of Bedford Avenue in Williamsburg and Smith Street in Cobble Hill/Carroll Gardens.”

This $5.388 Million Unit Just Became Queens Most Expensive Apartment – quickly becoming yesterdays story, though I do wonder if it will sell for over $5 million…