You are here: Home / Archives for Schools

Well you’ve cracked the sky, scrapers fill the air.
But will you keep on building higher
‘Til there’s no more room up there?

I know we’ve come a long way,
We’re changing day to day,
But tell me, where do the children play?

If the only thing you are focused on in LIC is that cute girl or guy down the hall, then this missive is not for you.  Or maybe it is for you, and you shouldn’t be so focused on that person down the hall.  Anyway, as all these new buildings in Long Island City begin to fill up, one enormous question looming for any parent with children entering, or soon-to-be-entering kindergarten is: will there be room for MY child in the local elementary school?  Right now the answer to that question is indeterminable because 1)  The number of children entering each class has not been calculated and 2) the ultimate number of slots available is also unknown.  Regarding the first part of this equation, if you have young children born between 2007 and 2012, I highly recommend you fill out the survey in the first link so that the city can be made aware of the need for elementary school spaces in LIC.  Also, please pass this on to anyone you know who has children of relevant age in this survey.  Regarding the second part of the equation, I highly recommend you attend a meeting being held by CEDC 30(Community Education District Council 30 in Queens) on Wednesday, August 15th at 6:30pm.  The exact location is still being determined, but will most likely be somewhere in Hunters Point.  I expect to be able to post the location by the end of the week, so mark the date on your calendar.

Probably the biggest outstanding question that needs to be addressed right now is “What is going to happen to the old PS78 space in the CityLights Building?”  There are a number of options available, including turning it into an early learning center(pre-K thru 1st or 2nd grade), to ride through the pig-in-a-python dilemma that is the current LIC elementary school problem.  After that, with what I expect to be a very active parent base, the sky is the limit.

Adequate School Seating For Long Island City – a petition to Mayor Bloomberg and the NYC Dept. of Ed.

KINDERGARTEN PANIC – LICtalk’s post from April 17th regarding this issue, with more links about this topic

Way Beyond Bake Sales: The $1 million PTA – whether it is PS87, as in this article, or PS78;  like it or not, this is the wave of the future in communities like ours with regards to public schools

Integrating A School, One Child At A Time

If we needed any other proof that Long Island City is becoming the center of the universe, the enormous amount of film being shot in our neighborhood is ample confirmation of our usurping the top slot from Manhattan.  Ok, ok, it’s mostly TV shows on remote cable channels, but I did see Stanford Blatch on Center Boulevard this week.  What this mostly means is that there are fewer places to park on the street, which doesn’t bother me much because I keep my Bentley in a temperature controlled garage, and of course it spends the weekends down the road in Southampton anyway.

Talking about the weekend, let’s get right into all that LIC has to offer for those still in town.  If you are a regular reader of this site, you know about my obsession with beer gardens.  Well,  there might be a reason for it: in addition to being Hollywood East, LIC is at the nexus of NYC beer gardens!  Just look at where the locations of them are in the first article, and they don’t even mention that we just got another one smack dab in the middle of LIC(JB Smokehouse)!  Fortunately, you know the first place to go when you want the most up-to-date info on Long Island City: LICtalk

As if being beer garden central isn’t enough, not to mention all the other regular, but extraordinary, things going on about town this weekend(PS1’s Warm-Up comes to mind), we have a very special one-off.  In fact, it might be one of the very few events for which I would be willing to forgo an afternoon at a beer garden.  Ladies and Gentlemen, this weekend and this weekend only, there is a pig roast in town.  Our town!  Now that my friends, is celluloid worthy!

(All this week’s news links are at the bottom, and there is a lot of news!)

Queens culinary destination LIC Market will celebrate its second birthday on Saturday, July 28th and Sunday, July 29th with its 2nd Anniversary Pig Roast and Clambake.  The weekend event will feature food, drinks and fun celebrating the restaurant’s second year in Long Island City.  I hope that you will consider news of LIC Market’s 2nd Anniversary Pig Roast and Clambake for calendar listings, features and more.

Since 2010 residents of Long Island City, Queens have enjoyed the fresh flavors that Chef/Owner Alex Schindler has brought to the area through simple yet flavorful menus and an in-house market featuring house-made food items and specialty ingredients sourced just for his patrons.   LIC Market (Long Island City Market) is the result of Schindler’s quest to bring the food, service and community atmosphere lacking in big-city dining to the neighborhood that he loves.  LIC Market is located at at 21-52 44th Drive (West of 23rd Street) in Long Island City, Queens, one of New York City’s growing culinary hotspots.

New Boutique Steakhouse In LIC Boasts $3,800 Bottle Of Wine –any discount for cases?

Best Rock Climbing Within Reach Of NYC – #1 is in LIC, of course

Metropolitan Opera Returns To LIC Waterfront – sorry to prick your bubble, but not Gantry Park

In Queens, An Artistic Alteration – big story on the Queens Plaza makeover(reminder, use my search tip to get full story)

LIC Residents Want New Waterfront High School To Have Eco Curriculum – this should read “Resident“, as in singular.  How about we start with Reading, Writing, and ‘rithmetic???

MTA Tunnels Under LIC Completed – ok tangential, am I the only resident who thinks this is really cool?

Jimmy V Getting Married This Weekend – guess where? It ain’t Canada

King Of Queens’ Has His Eye On New Turf – darn, we almost got thru a whole post without any real estate news.  A profile on Modern Spaces owner Eric Benaim

Bicyclist Killer Could Get 15 Years – sadly, not all news is good news in LIC

Come on over baby,
we got the bull by the horns
Yeah, we ain’t fakin’,
a-whole lotta shakin’ goin’ on

School seats, New Library, Gantry Park South, and now new Hospital?  Do we really have the bull by the horns?  Who knows?  Who cares?  It’s the weekend and a beauty so I’ll live for today and not expound too much on the news.  In fact, the only thing I am going to say is be sure to congratulate LIC resident and NY Met R.A. Dickey if you happen to run into him on the cappuccino line at Food Cellar.  In case you’ve been on Mars, he threw a 1-hitter this week and is the hottest pitcher in Major League Baseball.  Who knows, I may even become a Met-fan?

Brooklyn Waits On Promise of A New Park – just across the creek from LIC, might this happen here? 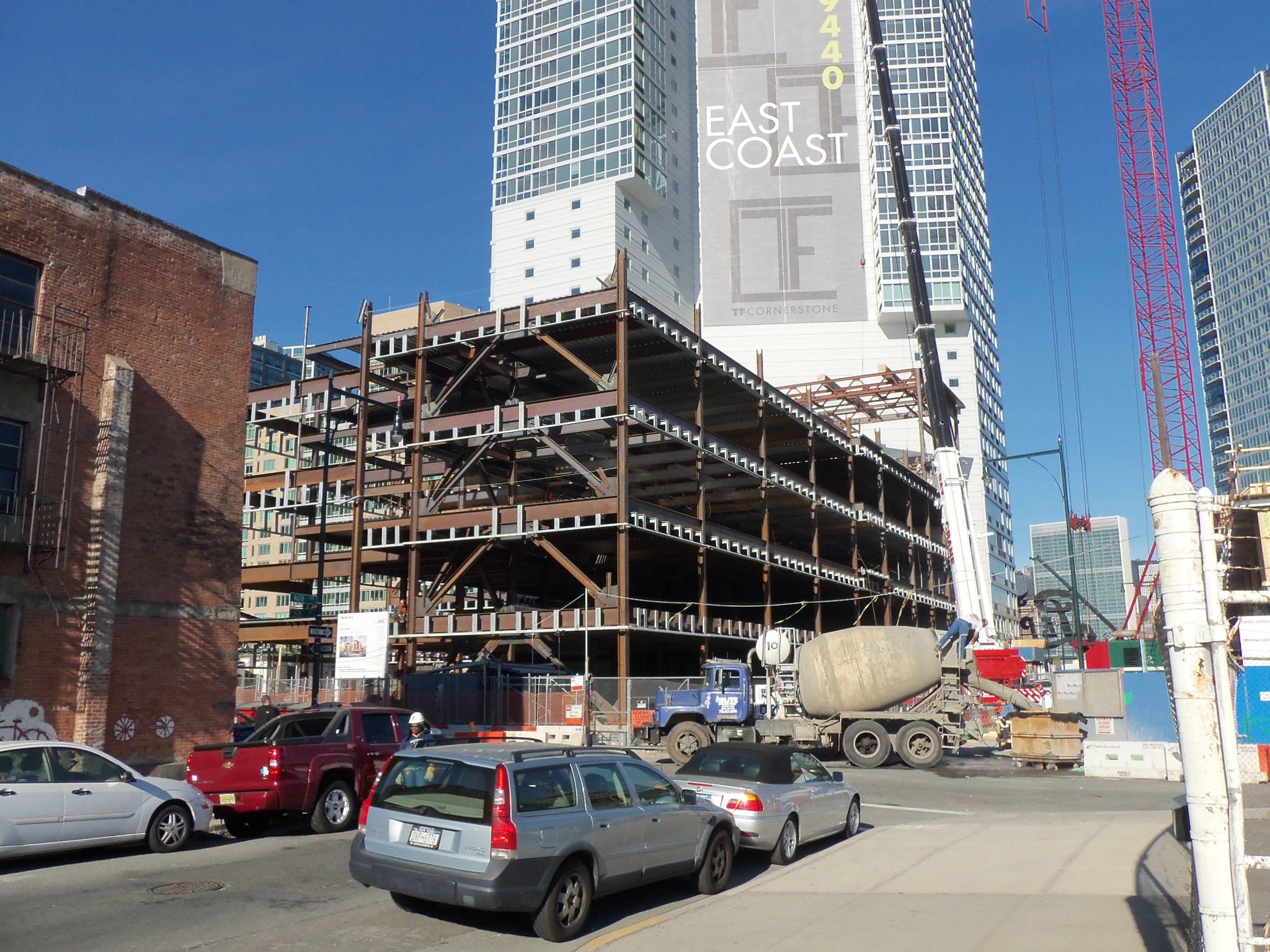 The above photo is of the new elementary school scheduled to open in Hunters Point in September of 2013.  We here at LICtalk.com look forward to keeping you apprised of all the local news, information, and scuttlebutt regarding education options in the area.  This past week there were two articles regarding NYC kindergarten classes and just in case you have already passed that hurdle, there’s a third article regarding the next step to look forward to in your education of little Fauntleroy.

As Ranks of Gifted Soar, a Fight for Kindergarten Slots

The Anxiety of Kindergarten Waiting Lists